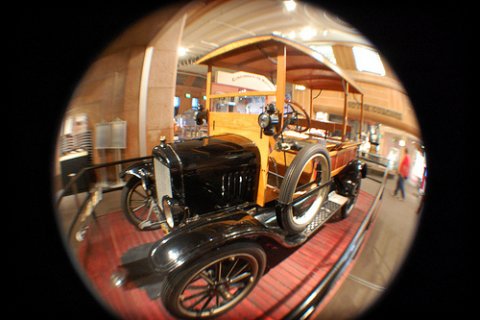 Construction of the Gloria Theatre began in 1920 but was halted by the depression that followed World War I. When it was completed in 1927, the building was 268 feet long by 90 feet wide with a vestibule running 100 feet from the main entrance on King Street to the foyer. The floor of the vestibule was terrazzo and the walls were lined with mirrors and glass-coverd cabinets for displaying movie posters. The foyer, which was 90 feet by 12 feet, offered seats "for those waiting to be attended by ushers." A smoking room and lavatories were accesible from the foyer. A unique feature of the theatre was the "rockery." Created by a Florida landscaper, the rockery contained a goldfish pool, stuffed birds, Spanish moss, and colored lights.

The large auditorium was decorated with murals, iron work, urns, and sculpture. The large shallow dome in the ceiling had spectacular lighting effects. "At first a soft amber light pervades, gliding into yellow, and then to a bright daylight effect. The come the climax effects. The sky changes, daylight giving way to night. One gazes into the infinite depths of the firmament. Stars twinkle most realistically, while fleecy clouds roll by, traveling cerenely in the sky."

The opening film presentation was "After Midnight" starring Norma Shearer. This silent film was accompanied by Mrs. Margaret Dengate on the new organ. When I interviewed Mrs. Dengate in 1992, she said, "I didn't know what was going on in the theatre. I couldn't look at anything. I had to watch the screen. People had a lot of fun at the theatre. Everybody was jolly. I miss it."

The College of Charleston bought the property in 1976. The seats were removed and sold to the Abbeville Opera House in Abbeville, S.C. The auditorium was used as a storage space for several years. In 1986, restoration began. The entrance, no longer on King Steet, is now at 44 George Street. The long vestiblue and ornate lobby are gone. The auditorium has many of the original features including the dome ceiling with twinkling stars and the expansive ornate iron grillwork surrounding the dome. To either side of the proscenium stands the original organ pipe rooms with their ornamental iron work.

In 1987, the Gloria Theatre was renamed to honor Albert Sottile, who was president of Pastime Amusement Company from its formation in 1908 until his death in 1960. The Sottile Theatre was the primary venue for Worldfest Charleston. This international film festival was a five-day celebration that included screenings of classic...

Another day at the river :)