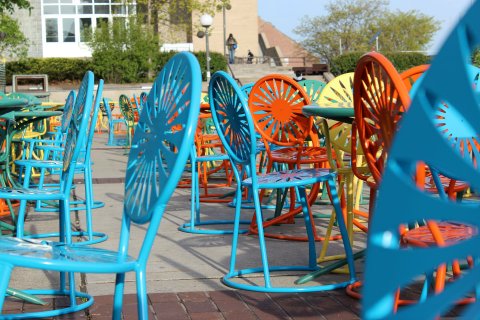 Virtual Learning 2.0: How will UW-Madison respond to online education?

What if August came and there were no piles of old couches on downtown terraces? What if there were no crowds of wide-eyed freshmen tramping down State Street?

What if autumn came to Madison not with the rush of confusion and excitement of 6, 000 18-year-olds out on their own for the first time but with the yawn of an extended summer? What if autumn in Madison came silently?

Almost overnight, higher education is transforming itself into a brave new virtual reality. Online education, much like online news was a decade ago, is all the rage. Yet some of the smartest people on the planet are rushing forward with little idea of what the future holds and without a business plan.

The University of Wisconsin-Madison is not one of them. Campus leaders here have taken a thoughtful, go-slow approach, but there are also risks in waiting too long. If the UW is not part of the march, will it be left in the dust or will it watch as the others walk off a cliff?

Here are some of the questions without answers:

If colleges and universities essentially give away their content online, will they go the way of newspapers with slashed staffs, and will some just go out of business? And what happens to the survivors, as the UW-Madison certainly will be? Will they continue as different institutions with less need for expensive bricks and mortar and far fewer smart and aggravating young people clogging their campuses?

And what would that mean for the rite of passage that is college? For millions of young Americans, those four years shape their lives, and it's not all because of what happens in the classroom. Can they get the same experience in their bedrooms, watching professors lecture on their laptops?

Four streams are coming together to form a raging torrent aimed at the center of higher education: skyrocketing student debt; a nagging recession that has diminished prospects for college grads and pinched their parents' ability to foot the bill; the advent of an aggressive for-profit higher education industry; and, now, the easy availability of higher education just a mouse click away.

Since 1985 the cost of college has increased 559%. The average student gets his degree complete with a $23, 000 debt after four years, and six-figure college debts are becoming increasingly common.

The Rosebuds - "Nice Fox" - Live on the Terrace in Madison, WI