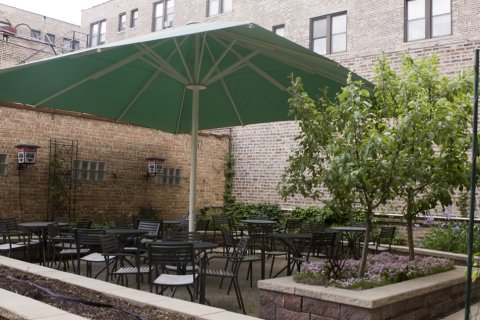 There's nothing like The Great Outdoors. And once you're finished with the Aykroyd/Candy buddy comedy classic, there's nothing like drinking outside during the Chicago Summer. Because you need to make the most out of every fleeting moment of sunshine, we've taken the liberty of ranking the best spots to do so, for your convenience...


3258 N Sheffield Ave; 773.281.4989
The massive outdoor beer garden was an institution even before they added a BBQ-minded kitchen thanks to the exhaustive beer selection and the enormous shade-providing tree will momentarily make you think you're in a forest, which is also possible result of sampling enough of the beer.


1072 N Milwaukee Ave; 773.772.4322
It's unlikely that many a pioneer had the privilege of dining on smoked gator ribs with blueberry BBQ sauce or buffalo heart sliders, but they did spend a fair amount of time outside, as you should on their wood-trimmed patio equipped with a fireplace that extends its life when others have closed on account of the cold.
201 N State St; 312.467.0200
The retractable roof ensures that an unexpected deluge (or an expected one) won't spoil your spectacular view of downtown, and the ridiculously good looking crowd becomes even more so when you're there over the course of an entire Sunday Funday.
201 E Delaware Pl; 312.924.2531
The garden terrace atop the Raffaello Hotel was already prime real estate for before they nabbed the former Aviary drinks master to oversee the cocktail program, meaning your rooftop view now comes with a margarita made with liquid nitrogen. Okay, that's not entirely true, you still have to buy it.
2952 W Armitage Ave; 773.384.3333
The youngest entry on the list has drawn comparisons to a certain taco joint sitting one spot further down, and while it's still learning to navigate the hungry fried chicken-seeking hordes that have been there since day one, there's no denying the powerful combination of sun-drenched picnic tables and Negroni slushies.
1531 N Damen; 773.235.4039
The people watching is top-notch, and the pork belly tacos are better. Almost too good, as scoring a table can be rough. But then, getting there early just means more hours spent outside washing down taco after taco with margarita after margarita, so really they're doing you a favor, right?
1816 N Clark St; 312.254.4747
Being a bit removed from downtown atop the Hotel Lincoln a singular view of Lincoln Park (so much Abe!) fading southward into the skyline, and Paul Virant's resto being right downstairs means your Templeton Rye-fueled Midwest Mule can be paired with some walleye "burgers" and crispy chicken sausage.
Source: www.thrillist.com