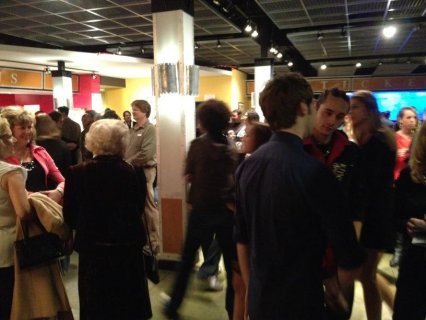 During WWII, this venue opened as a moviehouse. It fell on hard times and closed in 1977, but was renovated into an art-deco design and architecture movie theater that opened in the late '90s.

I worked here when it was a dinner theater, playing movies where you could order food & booze from a server (enter me.) We would also host conferences and other events and had to dress up to match the '40s look of the theater, but they would always put us in flapper dresses. So be it. It was really fun.

Then, in '03, they changed their concept because they weren't pulling a profit. They installed super high tech seats for possible business conference clients, and stadium seating and a concession stand. That was boring- selling boring old paninis and popcorn.

These days, it doesn't even have regular movie times anymore, but still shows movies seasonally. Call 843-722-FILM for showtimes in May, June, July, November, December and January. I also heard that improvisational groups regularly perform here like the Have Nots- there might be others, but I'm not positive.