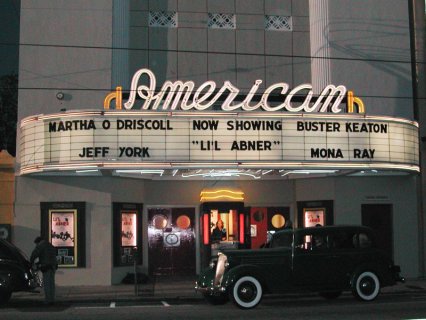 The Garden Theatre opened on January 14, 1918. When it opened, one entered across a tile floor under a huge ornate arch into a garden of hanging flower baskets, caged singing canaries, trellises and crystal chandeliers.

Silent movies were shown at first accompanied by Margaret Dengate on an American Fotoplayer which was a piano-organ complete with sound effects. Mrs. Dengate said in an interview with us in 1993, “I could make the sounds of shooting pistols, slamming doors, creaks and others.”

In 1929 the Garden Theatre began a policy of showing only films made in the “Vitaphone” process. The first film of this type was “On Trial” with Pauline Frederick. After the nearby Victory Theatre was demolished in 1946, the Garden Theatre presented both film and stage shows.

In the 1950s, the Garden Theatre continued to offer a combination of movies and stage shows. On March 28, 1958, the movie being shown was “The Gambler and the Lady” with Dane Clark and Naomi Chance. The stage show attraction was Blackstone the Magician.

During the 1960s, The Garden Theatre was used by numerous schools, churches, and organizations. It served for awhile as the home of the Charleston Opera Company. The College of Charleston used the theatre for its initial Fine Arts Series of lectures and films.

The City of Charleston leased the Garden Theatre in 1977, and made substantial renovations including extending the stage and installing a new heating and air conditioning system. The 650 seat theater reopened in 1978 with live stage shows and motion pictures. Spoleto Festival USA used the theater for performances that required a smaller venue.

In 1979, Roger McNiven coordinated a retrospective Rosselini film program for Spoleto Festival USA The following year, he presented an Orson Wells film series. McNiven also worked with the city’s Office of Cultural Affairs to present a Fall Film Festival at the Garden Theatre which included double features of suspense and horror films on Fridays and Saturday and comedies on Sundays.

In 2002, the City of Charleston did not renew its lease. The Beach Company sold the Garden Theatre to a group of investors. The Garden Theatre was the last remaining combination movie and stage theatre in Charleston. After major alterations, the building now houses a national retail chain store.

RED - Never Be The Same Live in Charleston, SC at The Dive